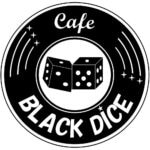 Black Dice Cafe is an eclectic pub mixing Japanese beers & sake with rockabilly decor that includes a vintage jukebox. This Japanese-Rockabilly bar embraces American nostalgia, British punk rock, and the Land of the Rising Sun in one neat package. Step back in time while listening to music on the jukebox and sipping Asian-inspired cocktails. Visit for vintage vibes, delicious drinks, and a large selection of Japanese whisky and sake. For a more casual drink, draught beer is also available. It should be noted that the bar only accepts cash. This self-described Japanese rockabilly bar, which could be a portal to another dimension collectively styled by David Lynch, Ridley Scott, and Wong Kar-wai, has been holding down Brockton Village long before Dundas West was cool.

Almost a decade in, little about the Dice has changed. With its diffuse turquoise light and black-and-white TV looping old movies, it’s one of the most unusual bars in the city. It’s also a serious industry hangout for off-shift bartenders who congregate to sip Japanese whisky and draft sake while jostling for high scores on the battered’ 50s-era Surf Champ pinball game. As you wait for your turn on the machine, order a Hitachino Nest and munch wasabi peas as surf rock blasts from the vintage jukebox. Black Dice is known for its retro atmosphere and extensive selection of Japanese whisky, sake, and craft beer. Hideki Saito, the owner, has been in the industry since his teens, holding management positions at Japanese restaurants and the similarly rockabilly-themed Disgraceland.

This place seems prominent at the western end of a stretch of bars along Dundas West, thanks to its unique selection of beverages, cocktails, and bar snacks. Saito claims that his wife assisted him in designing the space, but many of the items on the walls are from his collection. While there are many Japanese whiskies and cocktails available, most of the crowd on a Tuesday night I visited seemed to be downing simple draft beers, though even these are available from taps made impressively from old motorcycle parts. Asahi ($9) is also available on tap, but from a particular machine that keeps the beer super crisp and has a second tap just for releasing foam, allowing bartenders to create the perfect head to seal in the beer’s flavor. Instead of beer, you should go for a large 9-ounce shareable portion of the Sho Chiku Bai sake, poured from the tap directly into a traditional container and served with tiny traditional cups.

Click the button to discover other venues in: Toronto